Cast Iron Skillets are some of the best ways to cook and get that grill flavor you desire but inside the house. There are a lot of reasons why a cast iron skillet is popular when it comes to cooking and grilling regardless if it’s inside and outside.

What Are Cast Iron Skillets?

Cast iron is a very dense metal and that is nearly impossible to damage. It’s especially known as being the “king of holding heat” when it comes to cooking which is one of the many reasons why cast iron skillet best.

Withholding in heat means that cast iron is great for browning meats, cooking vegetables faster, and less stressful cooking with not having to constantly rotate the pan every so often.

That being said, it’s important not to clean your cast iron skillet how you would clean a traditional pan. This is because the soap will strip and interior of the pan and essentially ruin your pan. Once you cook with the pan a few times and discover the flavor that derives from using the pan, you’ll no longer feel a little strange about not washing the pan as you typically would.

To learn more about how to ‘wash’ a cast iron skillet, we recommend this video from Not Another Cooking Show: How to Clean a Cast Iron Pan after cooking

Available in both blue and red this large cast iron skillet is great for higher temperatures with its matte black enamel interior. The interior actually promotes the development of a patina to enhance your cooking performance which is important when it comes to cooking with a cast iron pan as it’s the added flavor to the dish that draws a lot of people to using this type of pan.

This Le Creuset Enameled Cast iron Signature Deep Round Grill pan also features signature side handles that provide a great grip when lifting the pan and features high ridges to keep ingredients out of fat and spouts on the side for drip-free pouring.

#4 Jean Patridque The Whatever Pan 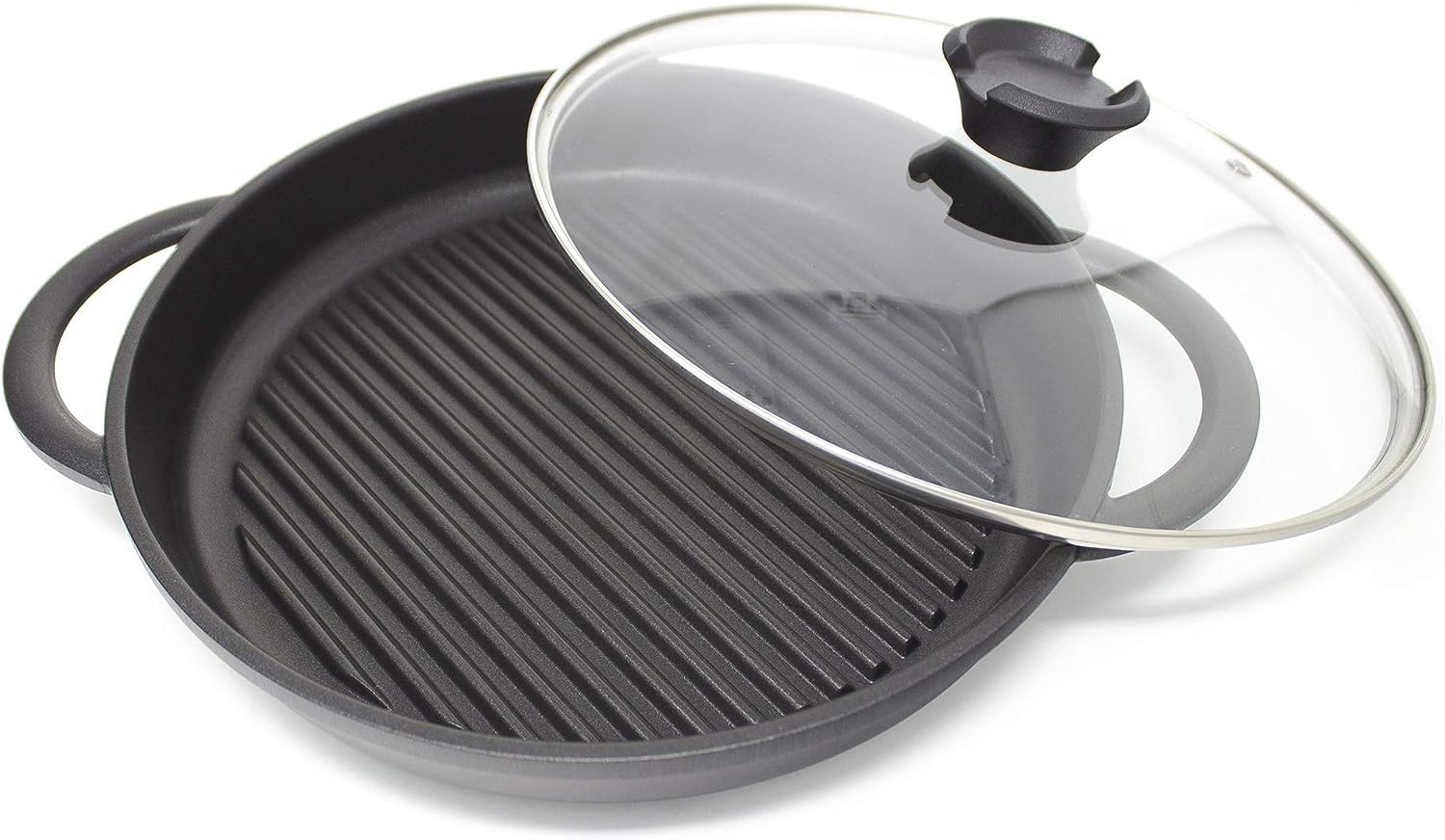 If you’re looking for a no-fuss pan for whatever, whenever, meet your new best friend, the Jean Patrique The Water Pan. This cast iron aluminum griddle pan comes with a lid for cast iron skillet and is a decent 10.6″ in size. It’s a high-quality die-cast aluminum pan that allows you to cook an impressive dish.

We love the fact that this large cast iron skillet features deep ridges which help to avoid any unwanted cooking messes and spills. It can be used over gas, ceramic, electric, campfire, or just pretty much whatever heat source you want to use it over.

It features a non-stick surface to get your meals cooking with less oil. Unlike a lot of non-stick pans, this one doesn’t feature any toxins so you can have the peace of mind that your easy cooking isn’t coming at the expense of your health.

If you’re looking for cast iron skillet seasoning, look no further than this Lodge Pre-Seasoned Cast Iron Pan. All the “hard” work is done for you with this cast iron skillet with the foundry seasoned, ready to use 10.5″ grill pan.

This is your perfect standard cast iron grill pan that’s great for camping, grilling, and cooking on a variety of different surfaces. Saute, sear, fry, bake and stir fry anything your heart desires with this perfect, cast iron pan. 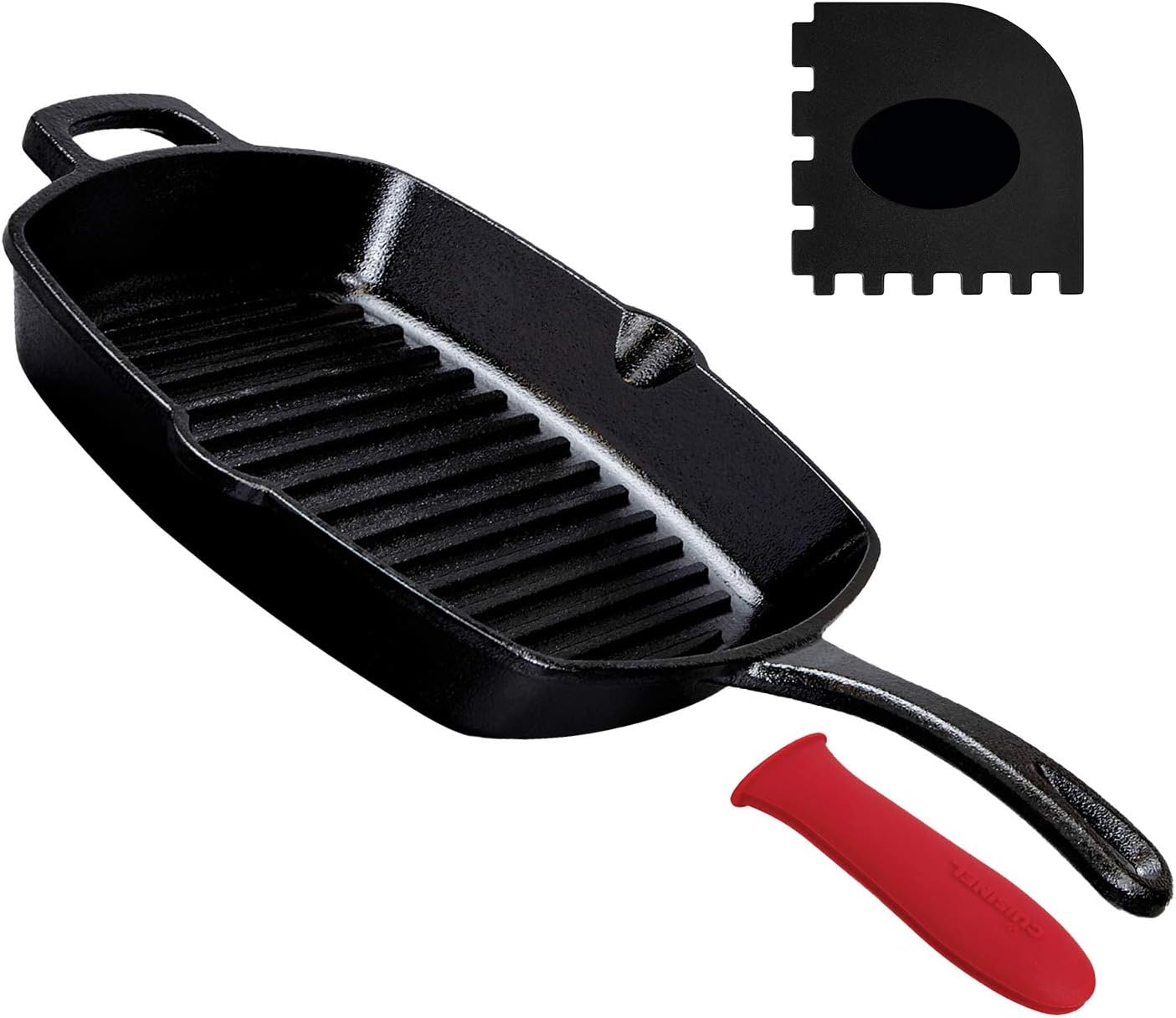 This 10.5 cast iron square pan comes in a variety of different sizes which makes for great cooking versatility. Seriously, the possibilities seem nearly endless with this multipurpose cast iron ribbed skillet. You can sear and grill anything indoor and outdoors on stovetops or on the grill. 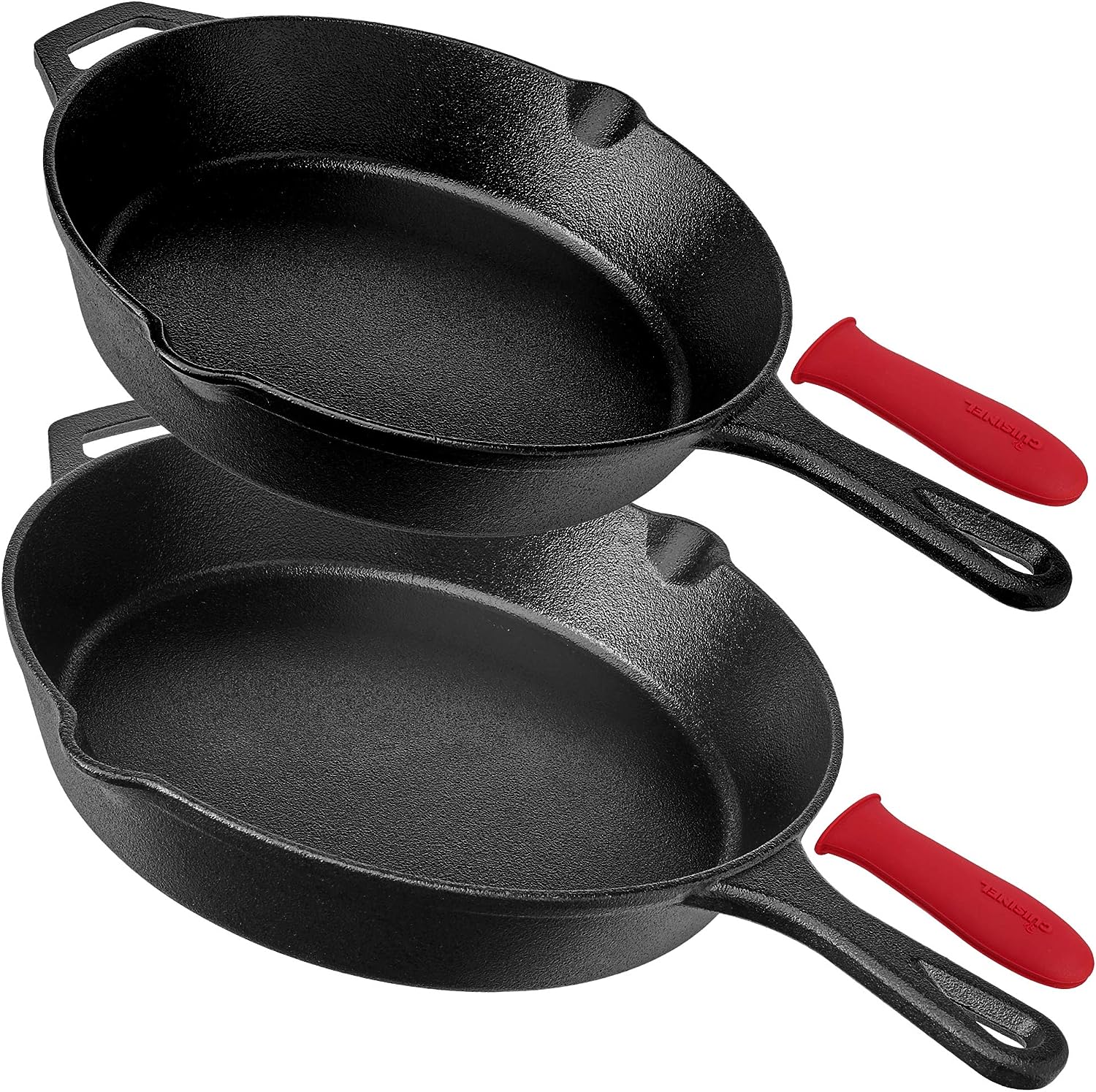 Cast iron skillets are an incredible, flavorful way to cook and grill practically on any cooking surface. This deal from Cuisinel Store is unbelievable. For under $50, you can get two incredibly high-quality and well-made pre-seasoned cast iron skillets. This bundle features both a 10 inch and a 12-inch pan with two heat resistant holders which is great because the handles get really hot.

They’re both oven safe and available in a variety of different sizes. With the precision heat distribution, you can perfectly cook your food and enjoy all the pre-seasoned flavor. We especially love when cast iron pans come preseasoned because one of the most popular searches on Google cast iron skillet seasoning. This way, you don’t have to worry about seasoning your pan and know it’s ready to go as soon as you get it!